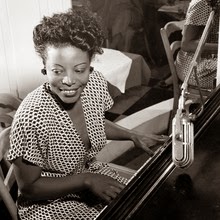 On Thursday, March 13th, a lucky group of New Yorkers stepped out of the bitter March cold and into the vibrant world of jazz, where two spectacular performers, a talented director, and a celebrated screenwriter combined forces at the Harlem Stage Gatehouse to celebrate the life and musical influence of jazz legacy Mary Lou Williams. Williams, who arranged for such bandleaders as Duke Ellington and Benny Goodman, and acted as both mentor and teacher to Thelonius Monk, Miles Davis, Charlie Parker, and Dizzy Gillespie, and many other talented artists, had a career that spanned eight decades. During her long career, she also performed with artists ranging from Jelly Roll Morton to Cecil Taylor. This remarkable tribute to Williams’ work, born from the artistic vision of internationally renowned pianist Geri Allen and realized under the theatrical direction of Golden Globe and Emmy award winning actress S. Epatha Merkerson, proved a vibrant and powerful production. The audience was enraptured as Williams was brought to life onstage through Allen’s virtuoso performance of the iconic musician’s work, and vocalist Carmen Lundy’s flawless portrayal of Williams herself.

The performance began with an introduction from Pat Cruz, the executive director of the Harlem Stage, who reminded the audience “if [they] were seeing this in any other part of America, [they] would be much farther back than [they] currently were.” Indeed, the performance was a uniquely intimate affair. Not only did the stage protrude out further than in most theatres—quite literally bringing the performance closer to the audience—but two rows of folding chairs had been placed in front of the theatre’s permanent seats, offering audience members the opportunity to observe the celebrated performers from just feet away. Chairs also lined both sides of the stage, making it a kind of central platform, an inviting focal point, rather than the typical, inaccessible stage. This arrangement broke the usual barrier between audience and performers, allowing for a stronger than usual connection between the two. The set was also designed to create an intimate atmosphere, consisting simply of three Persian rugs beneath a grand piano, a bass, and a drum set. Through its deliberate seating arrangement and set design, the performance achieved a rare level of intimacy between audience and performers. Those attending the performance felt less like audience members than guests in Williams’ sitting room, privy to one of her many musical salons at 63 Hamilton Terrace (mere blocks from the theatre itself).

The performers had yet to enter the stage when the lights began to dim. The instruments glowed under a slightly neon, pinkish light reminiscent of the neon signs of Jazz clubs that once dominated Harlem’s nightlife scene. Projected onto the back of the stage was a painted image of a youthful Mary Lou Williams donning a red blouse, her hair pulled loosely back, and her fingers resting on ivory piano keys. Throughout the show, such images of Williams at different points in her career would be projected, giving the audience a visual look at this iconic artist alongside the musical experience of her artistic work.
A few moments after the lights dimmed, the three musicians, dressed all in black, entered the stage and walked to their instruments with silent composure and grace. The concert began not with words, but with Allan’s energetic rendition of several of Williams’ original compositions. The audience was immediately dazzled by Allen’s passionate and skilled performance. As Allen’s playing began to slow, vocalist Carmen Lundy—portraying Williams—entered the stage. She took her place among the musicians with stunning presence, powerfully embodying the iconic musical figure. Lundy’s iridescent, black dress reached all the way to the floor and her sequined vest and fringed collar glittered and glowed under the colored light as she performed a passage written by Williams herself. “Jazz is a thing feeds love,” she began, “it heals the soul.” Indeed, when she began her rendition of “The Lady Who Swings the Band”—her dynamic and powerful voice reverberating off the theatre walls and achieving unimaginable depths and heights—the music seemed to reach directly into the soul of the audience. Members were compelled to sway, nod their heads, clap to the beat, and even make passionate exclamations, adding their own voices to the music of Allen and Lundy in the spirit of this truly intimate performance.
From this very first song, the strong artistic connection between Allen and Lundy was apparent. The two performers often made eye contact, and both moved to the music as they performed it. Their obvious connection seemed living proof of what Williams would describe as the “telepathy between musicians” later in the show. The bond between Allen and Lundy was palpable and pulled the audience in as well, sweeping them into the whirling passion of the music.
The rich and dynamic nature of the performance was furthered by Allen’s creative, full use of her instrument—she did not confine herself to the keys, but stood to pluck the piano’s strings from inside the body on several occasions. This musical effect added an ethereal, dreamlike quality to the scenes in which Lundy performed lines about mystical subjects, such as Williams’ visions and fascination with astrology. Allan’s all-encompassing use of her instrument seemed a representation both of the performance’s fullness and that of Williams’ career.
The concert’s only moment of total silence occurred during one of the aforementioned musically ethereal interludes (before Lundy’s rendition of “Aquarius”). Here, Lundy performed Williams’ recollection of sexual assault by a train conductor on her way to Chicago. “I didn’t forget it,” she said into the silence, “I absorbed it. It’s all there in the music.” And in a powerful parallel, Allan began to play again. The music resumed, carried on, continued forward just as Williams herself found the courage to do after this traumatic event.
The concert reached the apex of its interactive nature towards the end of the show with Lundy’s performance of “Rosa Mae.” Lundy emphatically invited the audience to sing along, and the theatre quickly filled with many different voices uniting in a musical call-and-response sequence. Again, the production broke the typical separation between audience and performers, creating a uniquely interactive theatrical experience.

By the end of this visionary tribute, audience members had been transported on a captivating musical journey spanning Williams’ long and influential career. They were invited to experience her legacy through a variety of modes: music (both instrumental and vocal), the spoken words of Williams herself, and a stage recreating this iconic musician’s personal artistic space. The concert, like Williams’ character and career, was rich, dynamic, and full. In a post-production interview, Merkerson expressed her satisfaction with the performance, stating that the chance to be a part of “recognizing [the history of music in Harlem] and bringing it to a larger audience” within today’s Harlem community was an “ extraordinary and wonderful experience.” Allen expressed similar satisfaction, remarking, “not only did [the show] fulfill my expectations, it exceeded them!” She also expressed her gratitude, emphasizing that although the performance originated from her artistic vision, it would not have been possible without the collaboration and talent of director S. Epatha Merkerson, scriptwriter Ferah Jasmin Griffin, vocalist Carmen Lundy, and band members Kenny Davis (bass) and Kassa Overall (drums). “Without them,” she said, “the performance wouldn’t be living onstage.” And what a living performance it was.

Victoria Henry,
for Harlem One Stop, Beat on the Street