On a cold, calm April night in Harlem, choreographers and dancers collaboratively convened in the rapturous and enigmatic power of dance. E-Moves, the critically acclaimed dance series of Harlem Stage now in its fourteenth year, illustrates the cooperative ideas of nine exploratory choreographers. From the jarring immediacy of gunfire in the fantastic opening piece Spitting on the Sidewalk, to the wild cries of three enchantresses at the close of the complex How Is Everything?, E-Moves 14 satisfyingly explored issues of the human experience. 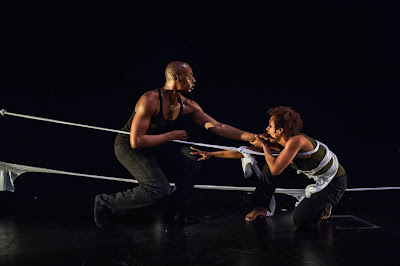 “Spitting on the Sidewalk” – Choreographers Germaul Barnes and Nia Love

Uniting the skillful expressiveness of Germaul Barnes, Maurice Chestnut, and Nia Love, Spitting on the Sidewalk examined the contemporary fixation on weaponry. An excerpt from the program handout demands that the viewer consider “a chalk outline on the sidewalk that any boy or girl can be buried in…a pool of blood that can be your mirror…here your lips are red from fighting your reflection…here prayer is a broken ladder that you will climb anyway.” Throughout the piece, these printed tenets unraveled flawlessly in the penetrating movements of Love, Chestnut, and Barnes. At an early point, a black box is passed silently between the three, appearing to symbolize the lineage of oppression as a shared black experience. Later, suspended moments of silence and dense motion point to a deep core of emotionalism; an emotionalism, of alienation and frustrated consciousness, that is reminiscent of Frantz Fanon’s Wretched of the Earth.

Ajjkkoiaujdz, assembled through the choreographic team of Satoshi Haga, Nelida Tirado, and Adia Whitaker, commenced a migration into the meaning of identity. As a “journey into awakening, faith, commitment, and connection to the things we can’t see but know exist,” Ajjkkoiaujdz felt illusory, playful, and natally familiar, but at times lacked cohesion. Despite the thematic missteps, the group’s physical intensity flowed lucidly across the stage like undulating brushstrokes. The ability of Whitaker, Tirado, and Haga to translate the hopeful futility of life and death into a surrealistic landscape is an ocular accomplishment. 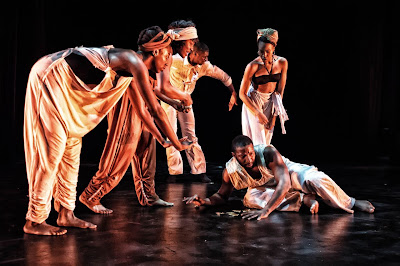 “How is Everything” , Choreographers Marguerite Hemmings, Nathan Trice, and Hattie Mae Williams

Once the intensely folkloric How Is Everything? introduced the final section of the night, the monochromatic scenes of the first two acts blossomed into a rhythmic representation of the romance, sex, and commitments intrinsic to our experiences. Guided by the choreography of Marguerite Hemmings, Nathan Trice, and Hattie Mae Williams, How Is Everything? seems to pose a double-edged question and statement. Several moments of the piece played into its organic nature. Williams’ solo dance with spinning champagne bottles provided an invigorating highlight, as did the concentrated sexual provocations of the male duo. Ultimately, the strong and subtly subdued shifts of movement demand that we address the normative conventions of marriages, of commitments, and of ourselves.

E-Moves 14 continues with its third, and final, performance this Friday, April 19th at 7:30pm. Tickets are $20 General/$16 Members. This is your last chance to experience exciting new works from some of the city’s most innovative choreographers, so don’t miss out! www.harlemstage.org

The closing evening of E-Moves 14 (Saturday, April 20 at 7:30pm) will commemorate the phenomenal series with a “Harlem Stage Takeover,” featuring emerging artists throughout (and outside) the Gatehouse. The “Takeover” will end with a DJ-dance party for all dancers and audience members.

Tickets to the “Takeover” are $10 with purchase of an E-Moves ticket, and are available through the Harlem Stage Box Office (212-281-9240). http://www.harlemstage.org/event/e-moves-14-the-takeover/

Review by Ada McElroy for Harlem One Stop