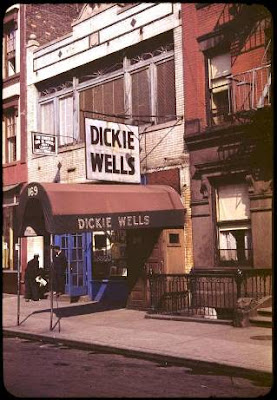 A HARLEM treasure that is no more, as a historic building at 169 West 133rd Street is demolished.

“The night life was fabulous. The corner saloons, back rooms jumped, you know, places Like Hotcha and Mike’s and little places that had back rooms. You’d go into Hotcha and Bobby Henderson was playing the piano, Billie Holliday was singing. You’d go across Lenox Avenue to the little bar across from Harlem Hospital and Art Tatum was playing the piano. Ethel Waters was here. The place just jumped. Dickie Well’s place on 133rd Street. God, some of the names escape me. Tillie’s Chicken Shack. Gladys Bentley’s Place. And you sort of did a tour.”

– From a WPA Oral History by Artist, Charles Alston

“Wells,” with their famed, “Chicken & Waffles”was one of Harlem’s most noted late night hang-outs. Prior to having them as tenants the building at 169 West 133rd Street was home to a club called, “The Nest”, which was housed in the basement, where another successful hang-out had been housed there.

According to a documentary presented by Thirteen.org:

“The Nest, which until little over a week ago padlocked behind the doors of an abandoned building on a quiet residential block, was arguably one of New York City’s greatest unsung cultural landmarks. The development of jazz as an artistic movement in the city is linked to this spot, which opened on October 18, 1923, in the basement of what was then a barbecue club.

In its heyday, during the height of Prohibition, the Nest hosted some of the most popular names in Harlem. It also attracted super star patrons like Mae West. Eventually more speakeasies opened in basements along the same block as the Nest, fostering a culture of clandestine drinking and improvised performance for a mixed audience of black and white club goers alike.” …