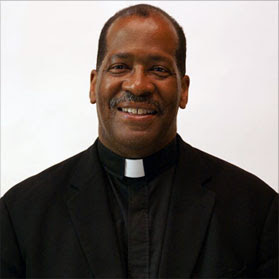 Father Gregory Chisholm, S.J, was installed as pastor of St. Charles Borromeo in Harlem this past Sunday, December 4th. He previously served as a pastor in Oakland, Calif., for five years and was a parish administrator in Los Angeles for six years before that. He was a professor at the University of Detroit Mercy, 1994-1998. He was ordained for the Society of Jesus in 1993.

His interests include theologies of liberation and the history of black Catholics. After his ordination in 1993, Fr. Chisholm was an assistant professor of Mechanical Engineering at the University of Detroit Mercy. He specialized in Engineering Vibration and Dynamics and did consulting work with General Motors Corporation. From April of 1998 until June of 2005, Fr. Chisholm was in full time parish ministry in Los Angeles, CA, at Holy Name of Jesus Church, a strong and diverse Roman Catholic community.

Harlem is pleased to welcome him into the Community’s flock of religious leaders!