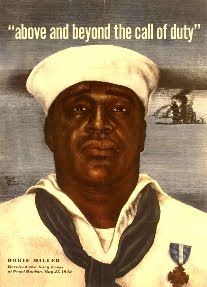 Born on Columbus Day 1919, Doris “Dorie” Miller grew up in Waco, Texas, where he played fullback on the high school football team. In September 1939, he enlisted in the U.S. Navy as a mess attendant, third class.

The following January he was assigned to the battleship USS West Virginia and soon became the ship’s heavyweight boxing champion. Miller was aboard the West Virginia at Pearl Harbor during the Japanese attack on December 7, 1941. He was assigned to help carry wounded sailors on deck to safer locations before taking control of an unattended antiaircraft gun, which he loaded and fired at enemy planes until he ran out of ammunition.

For his bravery, Dorie Miller was awarded the Navy Cross, becoming the first African-American sailor to win this high honor. In 1942, he was recruited to go on tour to sell war bonds, and his name and face became well known. Miller, later a messman on the USS Liscombe Bay, was killed when the aircraft carrier sank in the Pacific in November 1943.

The 1943 poster(top) of Miller by famed jazz record cover illustrator David Stone Martin was based on the photograph(above) and was used by the Navy as a recruiting poster.