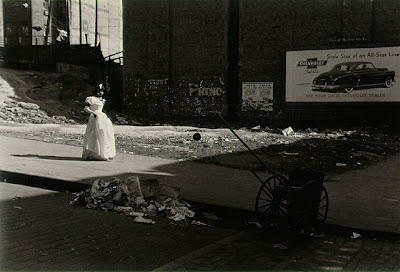 Roy DeCarava, an art photographer whose pictures of everyday life in Harlem helped clarify the African American experience for a wider audience, has died. He was 89.He died Tuesday in New York City, his daughter Wendy DeCarava said. The cause was not given.

DeCarava (pronounced Dee-cuh-RAH-vah) photographed Harlem during the 1940s, ’50s and
’60s with an insider’s view of the subway stations, restaurants, apartments and especially the people
who lived in the predominantly African American neighborhood. He also was well known for his candid shots of jazz musicians — many of them taken in smoky clubs using only available light. Shadow and darkness became hallmarks of DeCarava’s style.”Roy was one of the all-time great photographers,” Arthur Ollman, founding director of the Museum of Photographic Arts in San Diego, said in 2005. “

His photographs provided a vision of African American life that members of the white fine art photography establishment could not have accessed on their own.”DeCarava’s first major exhibit was at the Museum of Photographic Arts in San Diego in 1986. Ten years later, he was the subject of a one-man exhibit at the Museum of Modern Art in New York City.”What’s extraordinary about the pictures is the way they capture his lyrical sense of life,” Jonathan Galassi, a curator at the Museum of Modern Art, said in a 1996 interview with ABC. “You see pain, you see anger and you see an extraordinary quality of tenderness,” Galassi said in a separate interview with CBS.

Using a small, 35-millimeter camera that allowed him freedom to roam, DeCarava captured spontaneous moments. He shot in black and white, creating highly impressionistic images, and printed in a style that produced velvety shades of gray and black.Some of his earliest photos show young couples dancing in their kitchen on a Saturday night, and a father and his children dressed in their Sunday best, watching the Harlem River go by. He photographed men talking together in a basement that doubled as their clubhouse. DeCarava told National Public Radio in a 1996 interview that when he started taking pictures “there were no black images of dignity, no images of beautiful black people. There was this big hole. I tried to fill it.”

He did not ignore the problems of the black community, but usually addressed them in subtle ways. One of his best known photographs shows a young woman in a long white gown and a corsage who stands in rubble outside a tenement house. She is in sunlight, facing shadows. The image raises obvious questions about her future.

As a young photographer, DeCarava saw his share of overt racism, said Ollman, who interviewed him at length for the 1986 exhibit in San Diego. The social upheavals of the 1960s improved the situation.”Photo editors came along who could relate to editorial dissidence,” Ollman said. DeCarava’s uncommon subject matter became more accepted, but he still experienced racism of a different sort. “Roy was sometimes referred to as a black photographer, a qualifier that can be a subtle attempt to marginalize someone,” Ollman said. If there were few images of beautiful black people before DeCarava made them, there were also few black photographers who had achieved wide recognition.Gordon Parks, seven years older than DeCarava, broke the color line in photojournalism in the 1940s, shooting for Life, Look and other national magazines. James VanDerZee became known beyond the black community for his portraits of middle-class African Americans that offer glimpses into Harlem in the 1920s and ’30s. But DeCarava’s interest in photography as art led him in another direction.

Soon after DeCarava started taking photographs in the late 1940s, he found a powerful mentor in Edward Steichen, director of photography at the Museum of Modern Art, who encouraged DeCarava to apply for a Guggenheim fellowship.DeCarava was the first black photographer to receive the grant, in 1952. He used the $3,200 to support himself during his first year of photographing in Harlem.The images he took that year became a book, “The Sweet Flypaper of Life” (1955), with text by Langston Hughes, the foremost black poet of his time.