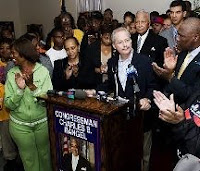 Though he’s facing critics in Washington over financial improprieties, Rep. Charles Rangel got nothing but love at home Saturday.

“I’m here to show support for my brother,” said former Mayor David Dinkins who was among 75 local politicians, church leaders and union members who rallied for Rangel in Harlem.
“He’s a very powerful member of Congress, and they would like to take him down. But that’s not going to happen.”

Rangel, who wasn’t at the event, has not been charged with wrongdoing, but critics have called for him to resign as chairman of the House Ways and Means Committee.

He’s the focus of an ethics committee probe into a host of allegations, including failure to report income, improperly leasing rent-stablilized apartments and using his congressional letterhead for fund-raising purposes.

“I’m here not in an attempt to refute the allegations, some of which are probably baseless, but to show support for Charlie Rangel,” Dinkins said. “I’m confident he will survive this and continue to support not only the 15th Congressional District but the rest of the country.”

Many, including Dinkins and Assemblyman Keith Wright (D-Harlem), pointed out that Rangel himself called for the ethics committee investigation.