The Rev. Frederick J. Eikerenkoetter II, the flamboyant minister better known as the Reverend Ike, who preached the blessings of material prosperity to a large congregation in New York and to television and radio audiences nationwide, died Tuesday in Los Angeles, where he had lived since 2007. He was 74.

His death was confirmed Wednesday by E. Bernard Jordan, a family spokesman. Reverend Ike had suffered a stroke in 2007 and never fully recovered, Mr. Jordan said.

“Close your eyes and see green,” 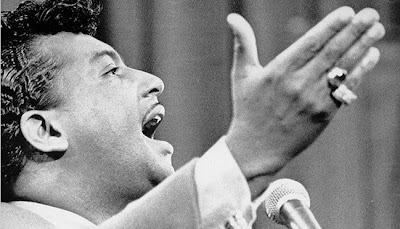 Reverend Ike would tell his 5,000 parishioners from a red-carpeted stage at the former Loew’s film palace on 175th Street in Washington Heights, the headquarters of his United Church Science of Living Institute.

“Money up to your armpits,
a roomful of money and there you are,
just tossing around in it like a swimming pool.” 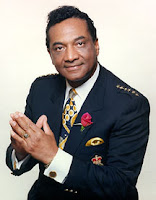 The philosophy held that St. Paul was wrong; that the root of all evil is not the love of money, but rather the lack of it. It was a message that challenged traditional Christian messages about finding salvation through love and the intercession of the divine. The way to prosper and be well, Reverend Ike preached, was to forget about pie in the sky by and by and to look instead within oneself for divine power.

“This is the do-it-yourself church,” he proclaimed. “The only savior in this philosophy is God in you.”

One person who benefited from this philosophy of self-empowerment was Reverend Ike himself. Along with Jim Bakker, Jimmy Swaggart and Pat Robertson, he was one of the first evangelists to grasp the power of television. At the height of his success, in the 1970s, he reached an audience estimated at 2.5 million.

In return for spiritual inspiration, he requested cash donations from his parishioners, from his television and radio audiences, and from the recipients of his extensive mailings — preferably in paper currency, not coins. “Change makes your minister nervous in the service,” he would tell his congregation.

He would also, in return, mail his contributors a prayer cloth.

His critics saw the donations as the entire point of his ministry, calling him a con man misleading his flock. His defenders, while acknowledging his love of luxury, argued that his church had roots both in the traditions of African-American evangelism and in the philosophies of mind over matter.

Whether legitimately or not, the money flooded in, making him a multimillionaire and enabling him to flaunt the power of his creed with a show of sumptuous clothes, ostentatious jewelry, luxurious residences and exotic automobiles. “My garages runneth over,” he said.

His calling came to him early, he said. “Even when I was a young child, the other kids came to me to solve their problems,” he told the writer Clayton Riley.

At 14 he became assistant pastor for his father’s congregation, the Bible Way Baptist Church in Ridgeland. After high school, he attended the American Bible College in Chicago, receiving a bachelor’s degree in theology in 1956. After two years in the Air Force as a chaplain, he returned to Ridgeland to found the United Church of Jesus Christ for All People.

Finding the traditional Christian message constricting, he moved to Boston in 1964 to found the Miracle Temple and to practice faith-healing, which “was the big thing at the time,” he told Mr. Riley, “and I was just about the best in Boston, snatching people out of wheelchairs and off their crutches, pouring some oil over them while I commanded them to walk or see or hear.”

Two years later, still dissatisfied, he moved to New York City, setting up shop in an old Harlem movie theater, the Sunset, on 125th Street, with a marquee so narrow that it forced him to shorten his name to “Rev. Ike.” There he tinkered with his act, polishing his patter, introducing radio broadcasts and taking his show on the road. 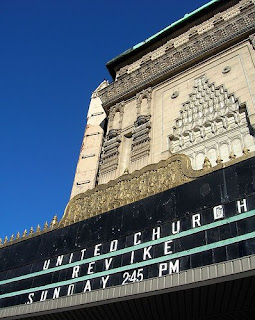 He began to refine his message to attract a more striving, stable, middle-class audience, people who wanted to hear that their hard work should be rewarded here and now.

In 1969, he paid more than half a million dollars for the old Loew’s 175th Street movie theater making it his headquarters, named the “Palace Cathedral.” 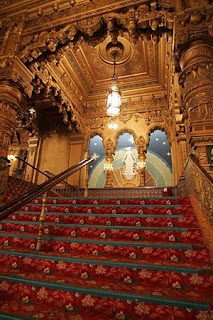 In his book
“On Broadway:
A Journey Uptown Over Time,”


With the move, the Reverend Ike stretched Christian tenets, founding the doctrine he named the Science of Living and thereby relocating the idea of God to the interior of the self, calling it “God in me,” with the power to bring the believer anything he or she desired in the way of health, wealth and peace of mind. He became, as he told Mr. Riley, “the first black man in America to preach positive self-image psychology to the black masses within a church setting.”

By the mid-1970s, Reverend Ike was touring the country and preaching over some 1,770 radio stations. Television stations in New York, Chicago, Atlanta, San Francisco, Los Angeles and other major markets were telecasting his videotaped sermons.

In 1962, he married Eula May Dent. They had a son, Xavier F. Eikerenkoetter, who also became an ordained minister at the United Church and took over the ministry when his father retired. They both survive him.

Because of his emphasis on material self-fulfillment, Reverend Ike alienated many traditional Christian ministers as well as leaders of the civil rights movement, who believed black churches should further social reform.

His huge income also provoked suspicion. Detractors accused him of preying on the poor, and the Internal Revenue Service and Postal Service investigated his businesses. Though its fortunes have waxed and waned in the last 20 years, the church continues to operate from the former Loew’s theater, which maintains tax-exempt status as a religious property and is occasionally rented to outside promoters to present concerts.

Reverend Ike could be an electric preacher, whether at the old theater or on the road appearing before standing-room-only audiences. And he could make his congregations laugh, drawing on the Bible to drive home his message about the virtues of material rewards.

“If it’s that difficult for a rich man to get into heaven,”

he would often say, citing Matthew,

“think how terrible it must be for a poor man to get in.

He doesn’t even have a bribe for the gatekeeper.”