If you’ve shopped Harlem’s B. Oyama Homme,
2330 Adam Clayton Powell, Jr. Boulevard then you know that its owner, Bernard Oyama has always provided the best apparel and haberdashery advice
on dressing for success.

Well, sartorially speaking, the shoe is now on the other foot as Oyama throws his hat in the ring of Gabonese presidential politics. And why not? …after all what other politician can offer voters a better “shirt off their back” then Mr. Oyama!

With the death in June of Gabon’s incumbent President Omar Bongo Ondimba, an election has been set for August 30, 2009. Rene Aboghe Ella, president of CENAP,
the national electoral commission, released the names of the 23 presidental candidates chosen
to participate in the election. 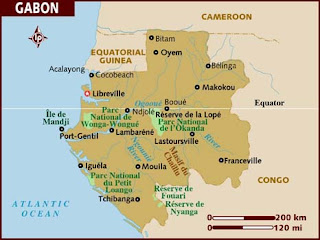 While the constitution stated that Interim President Rose Francine Rogombé should organise elections within 30 to 45 days, the Constitutional Court accepted the government’s request for a delay due to the circumstances.

In the aftermath of Bongo’s death, reports suggested that, due to the need to update the voters’ roll, the election might not be held within the 45-day period. Rogombé said on 20 June that preparations for the election would involve a “broad consultation with the active forces of the nation” and that her decisions would be made “under the triple seal of the constitution, consultations and consensus”.

In an interview on 22 June, Prime Minister Jean Eyeghe Ndong appeared to confirm this speculation, saying that “it seems certain that it will take us more than 45 days”. Under the constitution, a delay beyond 45 days is legally permissible in a case of force majeure. Eyeghe Ndong also said in the same interview that he would consider standing as a presidential candidate if he felt he had the necessary support.

The news agency Agence France-Presse reported that sources variously expected that an election could be held in September 2009, in the last quarter of 2009, or as late as 2010.