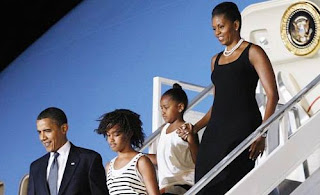 “Coming to Ghana is,
for many African Americans,
the equivalent of a spiritual journey” 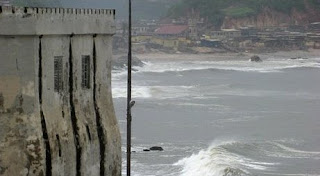 CAPE COAST, Ghana July 11, 2009 President Barack Obama says he hopes his family’s tour of a former slave fortress on the coast of Ghana shows his daughters that history can take very cruel turns.

Speaking afterward, Obama said his daughters are “growing up in such a blessed way.” He said one of the things he hopes they picked up from the tour is a sense of their obligation to fight oppression and cruelty everywhere.

Cape Coast Castle was the place where shackled Africans were held in squalid dungeons before they were shipped off into slavery. 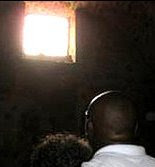 The First Family participated in the unveiling of a plaque now hanging outside the male slave dungeons that reads: “This plaque was unveiled by President Barack Obama and the First Lady Michelle Obama of the United States of America on the occasion of their visit to the Cape Coast Castle on the 11th day of July 2009.” 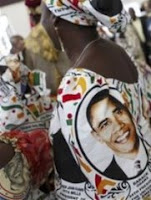