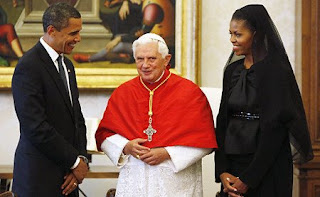 You have to hand it to Barack Obama, he is one “cool dude”. Who else could pull into St Peter’s Square in Rome to meet Pope Benedict XVI in a huge stretch limo, complete with tinted windows and wearing a pair of “shades”?

As his 54-car convoy pulled into the Vatican, he received the pop star treatment from some of the hundreds of tourists lining the Via Della Conciliazione which leads up to the square, with people applauding and screaming their approval.

“I’ve seen him, I’ve seen him”, shouted one young Italian woman, clearly delighted to have been present in the Holy See on the day that the first black US president came to town.

On the diplomatic front, there is every indication that this first ever meeting between Pope Benedict XVI and President Obama was a resounding success. In the build-up to this audience, much had been made of possible differences between the two men on issues such as abortion and stem cell research. But judging from the body language both before and after their meeting, those differences did not prove insuperable. At the end of a 35-minute audience in the Pontifical Library, the pope told the president that he would pray for him, whilst the president responded: “Thank you very much, I’m really grateful, I look forward to a very strong relationship between our two countries.”

The Obamas dropped by the Vatican on Friday for a meeting with Pope Benedict XVI with their daughters Sasha and Malia in tow. Michelle Obama observed Catholic tradition by donning a long black veil. The veil, skirt and blouse (a black version of the white bow blouse she wore in Prague last April) where by Moschino, accented with a black belt by Azzedine Alaia.