On Friday night I visited Temple M, a performance space in a picturesque part of Harlem newly designed by Michel Madie – real estate broker, doctor of veterinary medicine and all-around Renaissance Man. Performing was Guyanese soul singer Nhojj, with Sean & urban spiRitual (their capitalization, not mine) as the warm-up act. Before I get to the music, however, a few words about Temple M. 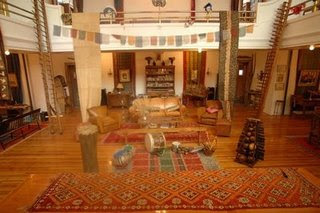 This image from the temporary Temple M website shows the view from the stage. Note the living room feel.

A spacious townhouse used at different times as a residence, a synagogue and a church, Temple M is now a welcoming, almost cozy, performance hall. The ambiance of the place has to be experienced to be believed. It feels like somebody’s living room, except for the stage, sound & video equipment, synthesizers and grand piano. The interior design mixes African and European influences, resulting in a space that seems at once familiar and slightly exotic. There’s a small but fully functional commercial kitchen in the back (the chef is Michel Madie himself, naturally), and the food is organic, delicious and cheap. The overall effect is one of warmth and welcome – if you visit Temple M, you’re likely to fall in love with it. 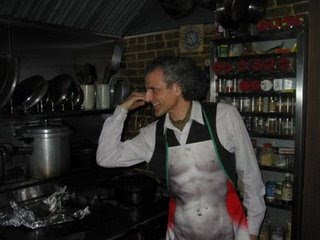 Temple M founder Michel Madie demonstrates his buff physique in the kitchen. Photo by John Norwood, a friend of Michel’s and my guide to NY social circles. 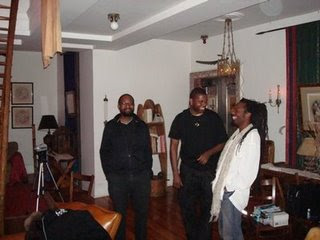 Some audience members (and Michel coming through the door from the kitchen). 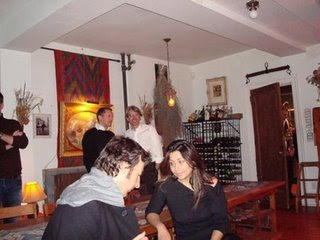 On to the music. The warm-up band was Sean & urban spiRitual. urban spiRitual played nice jazzy/folksy music on organ, trumpet and bass guitar while Sean declaimed new age-y lyrics. No singing was involved, nor even rapping. I’m biased personally in that I prefer my music to actually be music, but I would have rather just listened to the backing band – they seemed to know what they were doing. Bias or no bias, I wasn’t the only one in the audience to make this observation. 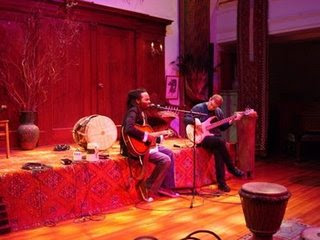 Nhojj, the main act of the evening, sang beautiful soul music, accompanied with a great deal of skill by Bob, the bass player from urban spiRitual (who’d never played with him before). Nhojj has a smooth, light voice that is perfectly suited for the kind of music he sings. The lyrics weren’t exactly groundbreaking, but the delivery was pleasant, and some of the vocal acrobatics he engaged in now and then seemed a bit contrived, but he was clearly enjoying himself and the audience gave him latitude. I know little of soul music, so I will just say is that I enjoyed sitting there and listening to Nhojj’s gentle, tender songs, and I would have happily sat there for an hour longer. 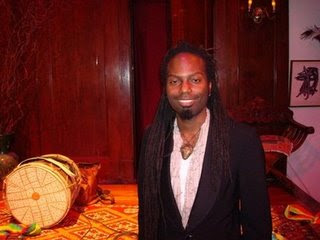 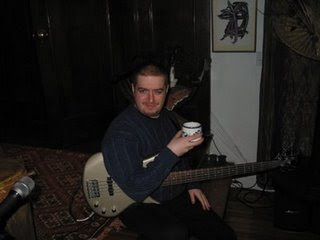 In conclusion, a very satisfying evening at a fresh and very welcoming venue. I will definitely be back to Temple M in the future. From what I saw on Friday night, it has a lot of potential – and, considering the seemingly inexhaustible energy of Michel Madie, that potential is likely to be fulfilled. Whether you’re looking for a cool space to perform in or the hot new place to bring your date, Temple M is a place to keep in mind.

(Upcoming events include a ‘Duel’in Organ Extravaganza’ , April 18 8 p.m., featuring organists Vito di Modugno and Radam Schwart plus others. Temple M is located at 555 W 141st St. Incidentally, that is an incredibly beautiful part of Harlem – having moved to NY recently, I had no idea parts of Harlem had such wonderful architecture.)

Other events this weekend: if you’re reading this Saturday night or Sunday morning, go over to the Park Avenue Armory and take a look at the AIPAD Photography Show. This annual exhibit includes hundreds of absolutely stunning images from photography art dealers around the world, but it runs only for a few days and Sunday is the last.