In a recent, “At Home in Harlem” blog entry for
the Huffington Post, Michael Henry Adams the, “writer-historian- activist” laments the shifts and changes in his Harlem life.

On, An Avenue Named Convent…
in language and perspective reminiscent of
Tennessee Williams’ Blanche Dubois, reflecting 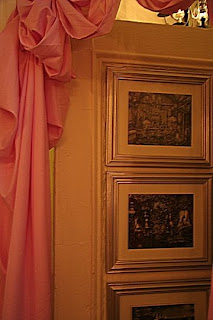 on the loss of her beloved Belle Reve, Mr. Adams weaves a tale, in image and prose, that by his own admission is personally revealing, if somewhat enhanced by the sparkle and glow of candle light.
We offer this reprint
of his text and images for those lovers of Harlem’s many personal sagas.

At Home In Harlem 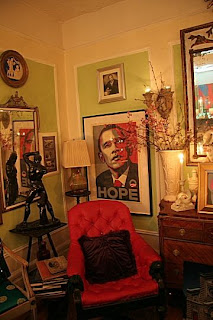 Sometimes we’re lucky and get exactly what we want. Yet there’s a limit to good fortune, Norval White or not. No, I’m not expressing regret over a duplex at the top of River House; I’m only lamenting a sad irony. Ridiculously cheap, my upper-Manhattan aerie is still unaffordable for this busy but poorly compensated writer-historian-activist. 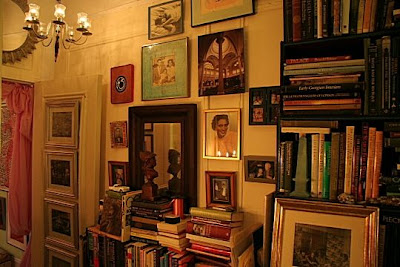 “You might want to try a roommate?”
suggested my building’s diligent attorney at Housing Court. She wore the most amazingly clear and brilliant emerald-cut diamond ring, weighing roughly ten carats, I’d estimate. Genuinely sympathetic, notwithstanding unwavering professionalism, she readily trumped protest that I’d only one bedroom with, “I understand about having just one bedroom, but better a roommate than becoming homeless?”

Who among us is in a position to argue with such indisputable logic? And how poignant too, that lonely and longing for the company of someone so nice to come home to: the elusive boyfriend, Mr. Right, shacking-up is now offered as the answer to my problems. Only it’s impossible? Those few dear friends, friends fond enough to successfully happily coexist with in a limited space, mostly felled by Aids, are already long dead.

In any case if my building’s lawyer was perfectly fair, though without great empathy the lady judge was, by contrast, a holdover from the epoch of the divine right of kings and landlords. 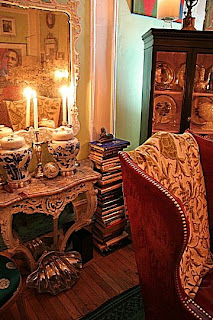 Unlike my case,
for what insignificantly trivial sums are people thrown
into the streets with nowhere to go.

What is the good of a city with more billionaires and multi-million dollar bonuses than any other, if every day people can lose everything for no substantive reason and often due to circumstances utterly beyond their control?

I love my tiny lower Convent Avenue hideaway. I’ve been quite happy here for the past two years.

Built in 1909, the St. Agnes Apartments was designed by the prolific, mostly commercial architect, Henri Fouchaux. The Madams of the Sacred Heart, whose convent school between 129th and 135th Streets, gave the avenue its name, selling the lots for a full block of apartments named for different saints, stipulated that they could not be owned or occupied by “Negros.” 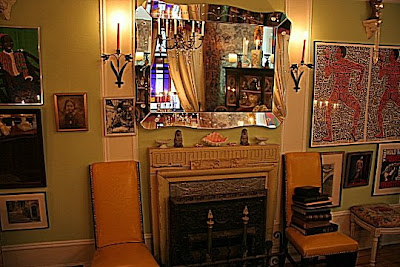 If it lacks accommodation for guests, a terrace, a working fireplace or marble walls, inspired by drawings I’ve made of fanciful imaginary interiors it nevertheless possesses all there is that I truly require.

I’m surrounded by delightful images by special artists like Grace Williams, Arnold Rice, Michael Mc Collom, Marvin Smith and Ruben Ron Callo. Architectural fragments, relics of lost landmarks are another notable element of the decoration. Some chairs were discovered in junk shops, while a steel desk and two tables were retrieved from the from the street.

Every wall, and even the doors, display views of old houses in Harlem, New York, Newport and Akron, Ohio, where I grew up. Colorful curtains made from sheets, quaint candlesticks in the form of fish, porcelain, silver, old mirrors and old furniture combine to create a stimulating atmosphere in a perpetually dark apartment that I hope is as welcoming to others as it is full of sparkle. 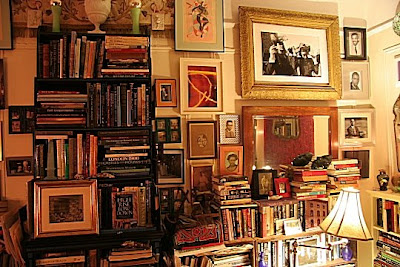 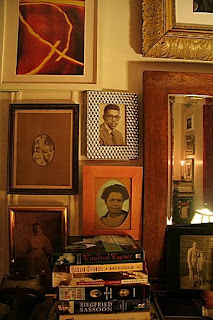 Above all else what most contributes to my well-being here are photographs of family and my dearest, oldest friends.

Old or new, books, housed mostly in the solitary bedroom with my indispensable computer, are perhaps the best and most faithful ‘friends’ to be had. 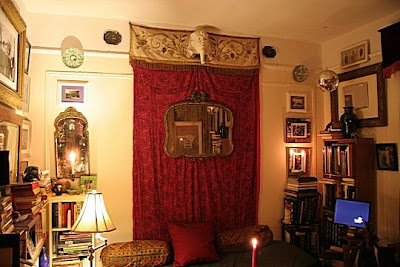 Moreover, like everything else in my treasured home they form a likeness of who I really am better than any other representation ever could. 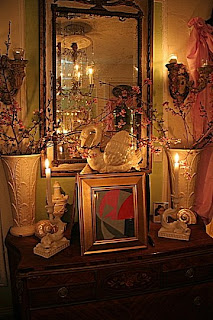