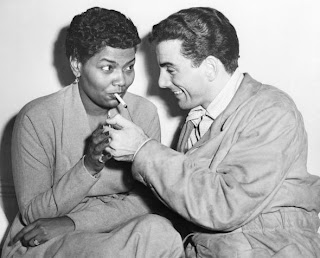 LOS ANGELES (AP) —
Big band and jazz drummer Louie Bellson, a master musician who performed with such greats as Duke Ellington, Count Basie, Benny Goodman and his late wife, Pearl Bailey, has died. He was 84.

Bellson died Saturday at Cedars-Sinai Medical Center in Los Angeles of complications of Parkinson’s disease following a broken hip in November, according to his wife, Francine.

It was through Ellington that he met Bailey, the great singer and Broadway performer. They married in 1952, and when she died in 1990 at age 72, he told the Philadelphia Daily News that “I just lost my best friend.”

He was designated as a “master of jazz” in 1994 by the National Endowment for the Arts, which said he “ranks among the foremost big-band drummers of the swing and post-swing eras and is best known for his precise technique and the invention of two pedal-operated bass drums.”

Bellson wrote more than 1,000 compositions and arrangements in several genres, including jazz, swing, orchestral suites, symphonic works and ballets. As an author, he published more than a dozen books on drums and percussion.

Bellson was born in 1924 in Rock Falls, Ill., son of Italian immigrants whose family name was originally Balassoni. He told Jazz Connection, an Internet magazine, that he was entranced by the sound of drums when his father took him to a parade when he was 3. His father, who eventually opened a music store, taught his son to play drums and other instruments.

Bellson was still in his teens when he pioneered the double bass drum set-up, and two years later he went on to win the Slingerland National Gene Krupa drumming contest.

“I’ve been of the opinion that all a drummer really needs is one bass drum, a snare drum, some tom-toms, a ride cymbal, a crash cymbal, sticks and brushes,” Bellson told Jazz Connection. “If you can’t do it with that, you better go back to the drawing board. The extra bass drum is frosting on the cake. It doesn’t mean that every drummer needs to play two bass drums. For me, it works.”

There are tentative plans for a Los Angeles-area memorial service, followed by a funeral and burial in his boyhood home of Moline, Ill., according to his Web site.