Teaching our children to get along, with us,
each other and strangers,
is perhaps a parent’s hardest but most urgent task.

When an older child wants the same toy a littler brother is already happily playing with, what can one do? As he’s bigger, he takes it. The toddler cries to be sure, but not out of resignation. He s determined to retake what he feels is rightfully his.

Anguished threats, “I’ll tell”, are heedless. So predictably, he hits, he scratches, he bites. Drawing blood, nonetheless he’s no match for his stronger sibling. His bigger brother, grown fed up by the persistent taunting, brandishing the toy, casually strikes the “hysterical” child. Without having meant to, the blow puts out the right eye of the “baby” whose arrival usurped all he had had. “He‘ll never see out of that eye again”, doctors say.

Who’s to blame? Can your sons continue to love each other, can they hope to live in peace? How has the ‘accident’ affected their sister? What do relatives or the neighbors think? If anything, what might you do, to make things alright again?

Finding our way to world peace is no less an imperative than solving our often complex domestic disputes. It’s also no easier.

OK, so Hamas started it. Now what? Either today or tomorrow, will more Israeli air strikes or the introduction of ground troops do anything at all to bring about greater security in the Middle-East?

As an African American, without either condoning their violent action or absolving them from responsibility for the present strife, I feel great empathy for the besieged Gaza Palestinians. A

Harlemite, and historian, a long-time fervent integrationist, now branded a racist, I have a difficult time placing greater, or even the majority of the blame, with those suffering most of the injury and most of the deaths.

How does that work, that it’s always supposed to be the poor, the oppressed, the attacked, the weak and neglected, who are at fault for our own affliction? Why is it that we without resources, jobs or even a political voice, are the ones most condemned for our obstruction, our racism, our terror?

Three or four centuries ago, Spanish and English colonist felt sure it was Native Americans who were uncivilized. Initially welcoming and helpful, soon they were dismissed as savage combatants, perpetually in pursuit of blood-lust. Yet just look at the outcome. The Indians were decimated. Today they retain not even one-one-thousandth of their richly endowed, totally appropriated former “homeland”.

Similar are Africans. Sure, warring tribes practiced slavery long before encountering Europeans. But, until the fateful involvement of Whites, slavery was hardly the mammoth, utterly brutal, multinational fulcrum of profit it became.

Certainly no African ever ask to be placed in bondage, to labor here for someone else, or dreamed of bequeathing to their children, grandchildren and their children, so dire a destiny.

To Germans, Nationalist-Socialist, Jews, irrespective of class, skill or accomplishment, were a malevolent plague. As such, their eradication became a goal of greater importance than establishing a one -thousand year Reich, dominating the world. Finally, for Adolph Hitler and other fanatical Nazis, killing Jews became a mission above and beyond even survival of the German volk.

Believing hatred to stem, at least in part, from the hater’s guilt for his exploitation of others, Hitler’s Jewish persecution is incomprehensible. Demonizing his victims, he made them effective scapegoats for every ill in the entire world. But apart from this ploy to gain political power, little else was attempted to utilize subjugated Jews on either a practical or logical basis. Invariably, even when employed as slave laborers, the goal of death superseded productivity.

It’s this degree of unambiguously self-destructive contempt that makes the Holocaust chillingly frightful. So does its place in the recent past, little more than a decade before my birth. It’s hard indeed to dispute t hose who contend that this was the ultimate horror of modern times: ample validation, along with a centuries old legacy of violation, for establishing a Jewish nation-state.

Nazi Germany was a regime of unspeakable brutality, implemented by citizens as famed for their civility as for their highly developed and highly advanced cultural identity. Allying time-honored cruelty with the most up-to-date technology of torture and murder, it effected countless casualties, many, educated people who read the same books that I have, who loved the same music, who watched and enjoyed some of the same plays and movies, too.

Although I know I’m not supposed to think so, the m ore distant and less unrelentingly merciless Middle Passage, as a result, evokes for me a far lesser sense of dread.

For how many African slaves in America were ever maltreated or sadistically tortured for amusement sake, with no consideration whatever, of the material consequence of their impaired or lost productivity? Some were, for a fact, but comparatively very few. Slavery, you see, was an aspect of America’s free enterprise system. Contrasted with the Holocaust, it was not all that far removed from the conditions some workers endure today.

Moreover, very many of us appreciate human nature well enough to understand that, given a chance, with no threat of disapproval from our family or peers, many would contentedly own slaves today. Assured an easy existence, with others to work to provide us with community, prestige and a luxurious life-style, able to leave our children in capable hands while we partook of pleasure , sometimes in the company of young, fit, lovely attendant s who couldn’t say no, which of us might demure?

As for helping to effect a Holocaust however, most feel that there’s no question as to whether or not we would act righteously. This is what gives the novel and movie The Reader such profound relevance.

As the last of Hitler’s willing executioners and hapless victims approach their life’s end, it’s all the more crucial to be reminded of the enormity of all that happened and the commonplace, even legalistic, way in which it occurred. Far from trivializing the German atrocity, as some critics claim, showing the humanity and sympathy of a Nazi is a powerful way to teach.

When an illiterate former death-camp guard unashamedly confesses to letting prisoners burn to death in a locked church, she maintains it was her duty. They were her responsibility, she explains, and unlocking the church during the upheaval of an Allied air raid, would have meant certain escape. “What”, she poignantly beseeches the court and us, “would you have done in my place?”

We feel certain we know the answer, but do we really?

Occasionally, humankind’s inhumanity is such that people voluntarily count themselves among the oppressed. Easily able to pass for White, as a boy civil rights activist, Walter White “rejoiced that he was Colored!” Envious White Atlantans were trying to set his family’s house afire. One feels reasonably assured that White eventually learned his mistake.

While it’s true that tyranny helps to make more virtuous, this is only due to a greater lack of opportunity to misbehave. Some, once liberated, even come to vie w oppressing others as a sign of equality or a demonstration of self-defense.

Just as wrong-headed is the equation of a group’s ability to withstand hardship and misery, and a relevant quotient of valor. How sad to read of Rabbinical students, pondering, with remorse, whether or not they and all other Jews are, or will be seen to be, culpable in the swindles of Bernard Madoff? With undue idealism, some friends of mine, non-Jews, even insist, that following the Holocaust, ‘enlightened’ by sorrow, Jews ought unfailingly to treat Palestinian freedom fighters with far greater consideration.

If The Reader convincingly suggests that, Hitler notwithstanding, all Germans are not evil, that even all bad Germans were not entirely bad, doesn’t Mr. Madoff, like Michael Milken, indicate as well that all Jews aren’t automatically all good either?

But let’s face it, lacking basic empathetic understanding for one another; people fail routinely to do as much as they could to make the world better. Nothing less will ever matte r, not if we truly desire significant change.

Saying, “never again”, demanding improved schools, universal health care and affordable but decent housing, we simply must include everyone. Being forced out of Park Avenue, Park Slope or China Town, then turning around to further gentrify Harlem, is no different than what was done to the Indians. 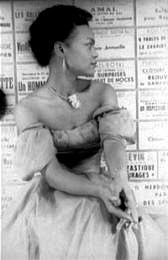 “Thank goodness that, good, bad or indifferent, some people, sometimes, muster the wherewithal to do what they can to make a difference in life.”
Earth Kitt mused last summer.

“We are mighty fortunate to be encouraged recently, by the inspirational and positive message of Senator Barack Obama”, she added.

Only, in singling out Obama for praise, this legendary song stylist, who died from cancer early on Christmas morning, might just as easily to have been referring instead to her own exceptional behavior.

It was January 18, 1968. President Kennedy and Malcolm X have both been slain. In April Dr. King will die. Robert Kennedy’s candidacy for president, much like Barack Obama’s, is seen as a beacon of hope in a sea of troubles. But Kennedy’s murder is mere months away too. America’s beleaguered, Black ghettos are in disarray. Some are even in flames.

So what was Earth Kitt expected to say?

Fresh from her triumphant portrayal of the seductive, sensually growling Cat-woman on TV’s Bat-man series, sex-kitten Kitt, whom Orson Wells had called, “the most exciting woman in the world!…”, was invited to lunch with fifty other ladies at the White House. Their purpose was to bring attention to President Lyndon B. Johnson’s proposals to combat crime in urban areas.

But when Mrs. Johnson innocently asked the star, “What makes American youth so disaffected?, Kitt hadn’t hesitated for a second in answering. It amounted, in fact, during the Vietnam War’s height, to a reprise of the ‘shot heard around the world.’

“You send the best of this country off to be shot and maimed…They rebel in the street. They will take pot.; They will get high. They don’t want to go to school because they’re going to be snatched off from their mothers to be shot in Vietnam… ”

This was the outpouring of one mother’s anguished outrage over war. It would cost her plenty too, including a decade-long spot topping the entertainment industry’s black list.

As an historian, sometimes I wonder, are any Black people today the same brave folks we used to be? Faced with the challenges of our forebears, would we be as capable of standing tall, of speaking truth to power? Black, White or any other race, have we, any of us, any hope at all, in the 21st Century, of ever emulating the courage of Medger Evers, Bay ard Rustin or Eartha Kitt?

In these days, when so few are willing to risk speaking up, notwithstanding all our current turmoil, it’s Eartha Kitt’s role as an anti-war activist that’s won her a place in the history of American civil rights. Wow, imagine, the power of such stirring words emanating from one so delicately-made and exquisitely turned-out, a woman of mixed American heritage! What better proof, either in a group, or even one at a time, in the USA, promoting peace is an option open equally, to all.