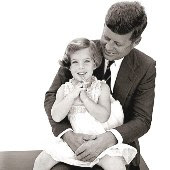 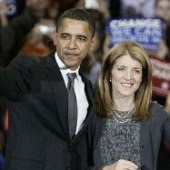 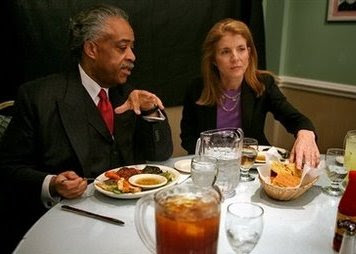 Another Kennedy
looks for Harlem’s support! 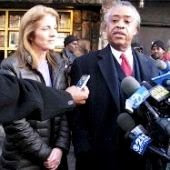 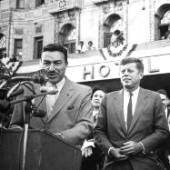 NEW YORK – The Rev. Al Sharpton took Caroline Kennedy to lunch Thursday at a famed Harlem soul food restaurant as she continued her quest to join her uncle in the U.S. Senate. Kennedy smiled as she and the civil rights activist made their way through a throng of media and into Sylvia’s, whose walls are lined with photographs of visiting politicians including the Clintons.

“I come at this as a mother, as a lawyer, as an author, as an education advocate and from a family that really has spent generations in public service,” Kennedy told reporters after lunch. “I feel this commitment, and this is a time when nobody can afford to sit out. And I hope that I have something to offer.”

The late President John F. Kennedy’s daughter acknowledged Wednesday she’s seeking to be appointed to the Senate seat held by Hillary Rodham Clinton, who has been nominated by President-elect Barack Obama to be secretary of state.

Kennedy was asked what she would need to do to prepare herself for the post, which has attracted the interest of at least a dozen Democratic officials including her former relative by marriage, state Attorney General Andrew Cuomo.

“I have, you know, quite a lot to learn, but I feel like I bring a lot with me, as well,” Kennedy said.

She was also asked why she was plunging into politics now, after spending most of her life carefully cultivating her privacy.

“These are issues that I care so much about and I understand that, really, I have been trying to work on them as a private citizen and in the position that I have,” she said. “But really, to solve our problems, I think government is the place where people need to come together.”

Kennedy’s emergence as a contender has generated both buzz and controversy. She comes from a Democratic dynasty but has never held public office, and some Republicans and Democrats have criticized her lack of experience.

Democratic Gov. David Paterson has said he won’t make an appointment until Clinton is confirmed. The governor confirmed Kennedy’s interest in the seat on Monday, the same day she reached out to Sharpton in a telephone call.

After speaking to Kennedy, Sharpton released a statement saying he disagreed with those who say she isn’t qualified to be U.S. senator.

He said he had invited her to dine wtih him at Sylvia’s this week, reminding her that he took Obama there during his campaign “so it’s a good luck stop since he did all right.”