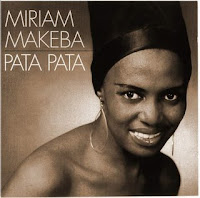 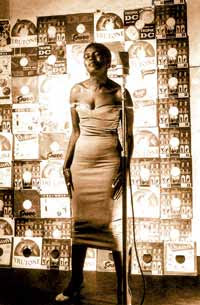 “I look at an ant
and I see myself:

a native South African, endowed by nature with a strength much greater than my size so I might cope with the weight of a racism that crushes my spirit.” – Miriam Makeba

Miriam Makeba, the South African singer whose voice stirred hopes of freedom among millions in her country with music that was banned by the apartheid authorities she struggled against, died overnight after performing at a concert in Italy on Sunday. She was 76.

The cause was cardiac arrest, according to Vincenza Di Saia, a doctor at the private Pineta Grande clinic in Castel Volturno, near Naples, where Ms. Makeba was taken by ambulance. The time of death was listed in hospital records as midnight, the doctor said.

Ms. Makeba collapsed as she was leaving the stage, the South African authorities said. She had been singing at a concert in support of Roberto Saviano, an author who has received death threats after writing about organized crime.

Widely known as “Mama Africa,” Ms. Makeba was a prominent exiled opponent of apartheid since the South African authorities revoked her passport in 1960 and refused to allow her to return after she traveled abroad. She was prevented from attending her mother’s funeral after touring in the United States.

Although Ms. Makeba had been weakened by osteoarthritis, her death stunned many in South Africa, where she was an enduring emblem of the travails of black people under the apartheid system of racial segregation. It ended with the release of Nelson Mandela from prison in 1990 and the country’s first fully democratic elections in 1994.

In a statement on Monday, Mr. Mandela said the death “of our beloved Miriam has saddened us and our nation.”

“Her haunting melodies gave voice to the pain of exile and dislocation which she felt for 31 long years,” he said. “At the same time, her music inspired a powerful sense of hope in all of us. “She was South Africa’s first lady of song and so richly deserved the title of Mama Afrika. She was a mother to our struggle and to the young nation of ours.”

Mr. Mandela’s was one of many tributes from South African leaders.As a singer, Ms. Makeba merged the ancient and the modern, tradition and individualism. Her 1960s hits “Qongqothwane,” known in English as “The Click Song,” and the dance song “Pata Pata,” which would be remade by many other performers in the next decades, used the tongue-clicking sound that is part of the Xhosa language her family spoke. Traditional African ululation was also one of her many vocal techniques.

But Ms. Makeba was also familiar with jazz and international pop and folk songs, and while South African songs would always be the core of her repertory, she built an ever-expanding repertory in many languages. Her voice was supremely flexible, and she could sound like a young girl or a craggy grandmother within the same song.