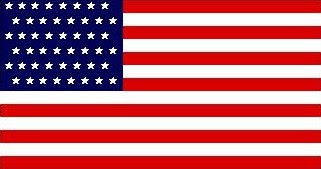 “After a month’s training learning the French rifle the 369th was sent into action in Bois-d’Hauze, Champagne. We stayed there until July 4th, 1918. Our ranks were thinned by the deadly German fire. We were completely worn out…” 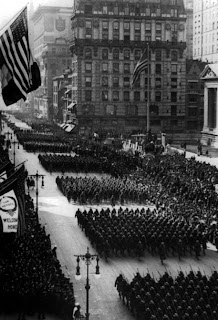 On a cold February afternoon in 1919, thousands of people gathered along New York’s Fifth Avenue and swayed to music provided by military band leader James Reese. They cheered and clapped as the 369th Infantry Regiment marched to the new musical rhythm that was sweeping Europe and America: jazz.

The 369th referred to themselves as the “men of bronze,” but became better known as the “Harlem Hellfighters,” because of their ferocity in battle. An all-black military unit, the regiment was under the command of mostly white officers. New York’s Union League, led by Col. William Hayward, organized the “Colored Regiments” of the Civil War. The Harlem Hellfighters fought the Germans at the battles of Belleau Wood and Chateau-Thiery. They distinguished themselves in combat, serving more than 6 months on the front lines while suffering more than 1400 casualties. 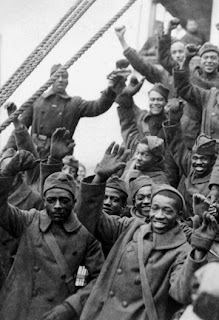 “Exploit of two colored infantrymen some weeks ago in repelling much larger German patrol, killing and wounding several Germans and winning Croix de Guerre by their gallantry, has roused fine spirit of emulation among colored troops, all of whom are looking forward to more active service. Only regret expressed by colored troops is that they are not given more dangerous work to do. They are especially amused at the stories being circulated that the American colored troops are placed in the most dangerous positions and all are desirous of having more active service than has been permitted them so far.”

What was it about the Harlem Hell Fighters that produced so many creative people, in addition to James Reese Europe and Noble Sissle, the 369th produced a great African American artist. In 1917, during World War I, Private Horace Pippin, Co. K, 369th Infantry, American Expeditionary Force, was sent to fight in the trenches of France. Twelve years after his return home, he began to paint his memories of his days as a soldier. 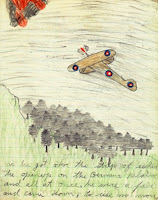 “The war brought out all of the art in me,” he said years later. “I came home with all of it in my mind, and I paint from it today.”

Pippin kept a diary in which he recorded sketches and thoughts about his wartime experiences. 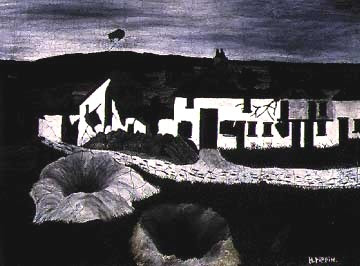 In Shell Holes and Observation Balloon, Champagne Sector, (above) Pippin recalls an abandoned battle site. The earth has been ruptured by shell fire; the farmhouses have been cracked and torn apart. Footprints mark the path where soldiers once tramped. An observation balloon rises on the horizon. The entire painting is desolate, painted in black, white, and tones of gray. It seems that life on this patch of land is over and will never return.

“…At daybreak we were to start our advancement…. Men laying all over wounded and dead, some was being carried. We wished we could help the wounded but we couldn’t. We had to leave them there and keep advancing, ducking from shell hole to shell hole all day…the snipers were plentiful. I remember spotting a shell hole and made a run for it. Just as I was within three feet and getting ready to dive in I were hit in the shoulder. There was four in the shell hole. One bound my wound the best he could and they all left me alone….”