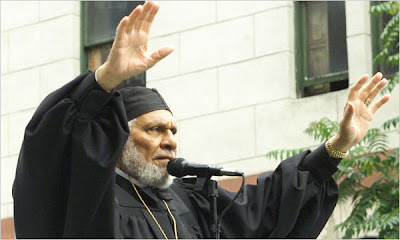 Bishop S. C. Madison, who was known to the faithful of the United House of Prayer for All People as Daddy and who was the driving force in expanding his church’s influence over the last decade, partly through a sweeping building program, died on Saturday at his home in Washington. He was 86.

Bishop Madison’s achievements included building or renovating 123 houses of prayer, as well as many apartment buildings, homes for the elderly, parsonages, houses and stores. He borrowed no money to do all this, relying entirely on members’ contributions.

He started a scholarship program for youths and rejuvenated the church’s spiritual practices, including healing rituals.

The House of Prayer emerged in the 1920s and 30s as part of what came to be called black holiness churches, characterized by their energetic services and charismatic leaders. As rural blacks moved to cities, these churches became refuges not only from white racism, but also from discrimination by urban black denominations put off by the newcomers’ country ways.

Services at House of Prayer congregations include speaking in tongues, music from exuberant brass bands and baptisms of thousands of people at once, sometimes with fire hoses. The church has also become known for the high-quality soul food and low prices of its cafeterias. It has 1.2 million active members at 150 branches in 24 states. (Estimates of the number of people attending services range far higher.)

Bishop Madison was the third charismatic leader of the church, all of whom had shoulder-length gray hair. Charles Manuel Grace, an immigrant from the Cape Verde Islands, was the first. A railroad cook and cranberry picker, he built the denomination’s first church in 1919 in West Wareham, Mass., with his own hands; he incorporated his new denomination in Washington in 1927.

He became known to his followers as a miraculous healer and adopted the name Sweet Daddy Grace. The New York Times reported in 1995 that he often told parishioners: “Salvation is by Grace only. Grace has given God a vacation.”

His followers showered him with love offerings as he paraded into churches, a phalanx of women waving large fans as he took his place on a red throne.

When Bishop Grace died in 1960, he left $25 million and a major fight over succession. After a court fight and two elections, Walter McCollough became the new Daddy.

After Bishop McCollough’s death in 1991, another succession fight erupted, pitting his son, Charles, against Bishop Madison, then a senior pastor. Again, there were lawsuits, and some dissidents noisily left the church after Bishop Madison won the job.

Bishop Madison prevailed in the suits, with judges generally ruling that the courts should not get involved in church affairs.

The new bishop became known as Precious Daddy, or just Daddy, and at a service described by The Washington City Paper in 2003, was hailed as “C.E.O., prophet and king.” In 1996, an article in The Daily Press of Newport News, Va., quoted a church official saying that members did not equate Bishop Madison with Jesus when they called him “savior.”

“The bishop is a savior in that he preaches the Gospel of Jesus Christ,” Apostle Stanley Guy said.

Samuel C. Madison was born on Feb. 24, 1922 in Greenville, S.C., and attended local public schools. He joined the United House of Prayer at 8, and in his youth was a boy scout, musician and deacon. In 1939, he had a profound religious experience, a church biography said.

He was ordained as a minister at 17. He served in a variety of churches before being assigned to God’s White House, the denomination’s headquarters in Washington, in 1969. At 23, be joined the church’s highest ecclesiastical body, the General Council. He was promoted to higher posts until being named bishop in 1991.

Bishop Madison’s first wife, the former Lucille Wynn, died in 1975. The next year, he married Elizabeth D. Beal of Washington, who is his only survivor.

When Bishop McCollough died, many followers were reluctant to accept his mortality, The Washington Post reported in 1996. Bishop Madison’s death will probably have the same effect.