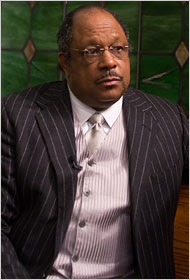 For the past several months, elegantly dressed men and women have been handing out thousands of postcards to passers-by on the streets of Harlem. It is part of a campaign to boycott neighborhood shops to protest gentrification. While the boycott itself has had little impact, the man behind it, an ex-convict turned minister named James D. Manning, has been increasingly difficult for some to ignore.

Mr. Manning, 61, has become an annoyance not only to shopkeepers, but to Harlem’s political, cultural and religious leaders as well. His goal is to force businesses to close — including those owned by blacks — causing the neighborhood’s economic rebirth to stall and, therefore, property values to decline. He has also called for a general rent strike.

In his sermons and in video messages posted on his church’s Web site and on YouTube, Mr. Manning, who is himself black, has denounced a medley of African-Americans, including Representative Charles Rangel, the Rev. Al Sharpton, Prof. Cornel West of Princeton University and the hip-hop performer Jay-Z. He has also had harsh words for black people in general, and black men in particular.

He said his followers have handed out 200,000 cards calling for an economic boycott. When they meet to discuss the boycott, he said, the police stand guard outside because of threats.
Mr. Manning served time in prison for various crimes and was dismissed out of hand by many Harlem leaders; several did not return calls after their representatives were told that he would be the topic of the interview. But no matter how potentially inflammatory his rhetoric has been, the pastor seems to have tapped into an emotional vein for at least some longtime residents of Harlem, a place where brownstones that had no takers in the 1980s are now on the market for more than $1 million.

On March 22, after services at Atlah World Missionary Church on 123rd Street in central Harlem, Mr. Manning led 120 members of his congregation on a protest march along 125th Street. (Atlah, an acronym for All the Land Anointed Holy, is Mr. Manning’s name for Harlem.)
The marchers, many of them older women and men who walked with evident pain and struggled to catch their breath after only a few blocks in the cold, proceeded silently, carrying neatly printed signs that advocated a three-year boycott of all Harlem businesses.

“I’ve offended a lot of people, to be sure, but I’ve also been very successful in getting people to work together,” Mr. Manning, a mild-mannered, balding man, said during a recent interview in his church’s office.

Mr. Manning, who has been the church’s pastor for 27 years, said the intent of the boycott was to return Harlem to its pregentrification days of 1990, without the crack, crime and boarded-up buildings. His hope, he says, is that declining property values will make housing affordable for those he believes are the neighborhood’s rightful owners: black people.

“It is our homeland. It is our Mecca. It is the only place we have,” he said, his voice rising. “It ought not to be overrun the way that’s happening. We are an endangered species.” But many of the new residents of Harlem are in fact middle-class African-Americans.

Mr. Manning’s many critics say his call for a boycott is irresponsible and would devastate a neighborhood that has only recently showed signs of even modest economic well-being.
A few months ago, during a phone conversation, Assemblyman Keith L. T. Wright told the pastor that his behavior was reckless and that he considered Mr. Manning an unknown quantity. Both men confirmed the details of the conversation.

“I told him, ‘I think it’s irresponsible as a pastor in this neighborhood to tell people not to pay rent,’ ” said Mr. Wright, who has been a frequent target of Mr. Manning’s gibes. Still, he said, the pastor represents anger and fear felt among some longtime black residents of Harlem.
“I’m worried, too, that with all this new development we’re being priced out,” said Mr. Wright. “People are scared. I’m scared. But not paying rent is not the answer.”

Sudhir Venkatesh, a professor of sociology at Columbia University, said Mr. Manning and his congregation of about 150 people do represent feelings shared by a large portion of the community.

“To write off Pastor Manning would be an absolute mistake,” he said. “There is a very strong sentiment in the black community in Harlem and elsewhere that during the last 20 years the government has subsidized middle- and upper-class interests that have tended not to promote economic development that caters to the lower classes. There’s a strong sentiment that they are losing their community.”

Observers point out that the same economic forces are causing similar changes in other neighborhoods — the South Bronx, the Lower East Side and Bedford-Stuyvesant, Brooklyn, among them. But because Harlem has long been a cultural touchstone, its survival as a predominantly black neighborhood has become central to the efforts of at least a half dozen groups.

Mr. Manning grew up outside the town of Red Springs, N.C., which was then segregated, picking cotton and tobacco as a boy. He took a bus to New York the day he graduated from high school. He became radicalized in the 1960s and said he was driven by his hatred of white people.

He began burglarizing homes, mostly on Long Island. Between 1969 and 1974, he said, he broke into as many as 100 houses, and once threatened an associate with a loaded shotgun. In all, he spent about three and a half years in prison in New York and Florida for burglary, robbery, larceny, criminal possession of a weapon and other charges before his release in 1978.

While in prison, he became a devout Christian, and upon release, he completed college and graduated from the Union Theological Seminary in Manhattan, earning a master’s degree in divinity in 1985.

On the pulpit, Mr. Manning is transformed into a shouting, singing, wildly gesticulating man. The members of his congregation sometimes trade weary looks during his sermons.

“He is not a traditional Baptist pastor, and it requires for me a good deal of prayer and contemplation to digest things, because he hits hard,” said Ladessia Johnson, 57, a longtime church member. She paused, and then added, “But I simply trust him.”