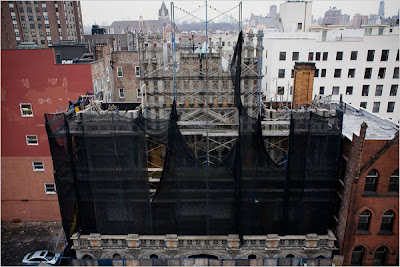 LaGRANGEVILLE, N.Y. — The Roman Catholic churches stand 66 miles apart, one in the center of Harlem, the other on 82 acres between a farm and a hunting club in this rural hamlet in Dutchess County.

The Harlem church, St. Thomas the Apostle, is an exquisite piece of neo-Gothic architecture, its spiky terra-cotta crown resembling a wedding cake. Finished in 1907, the church first served Irish parishioners and then a black congregation that waned and withered, its Sunday Mass sparsely attended, its building in dire need of repairs, until closing in 2003. Now it faces demolition. 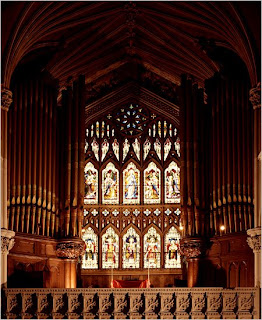 The church here, Blessed Kateri Tekakwitha, is still under construction, modest in appearance yet impressive in size. It will have a steel frame, a bluish stone facade and seats for 1,200 people — four times the number that can fit in the church it will replace, which in recent years has rapidly run out of space for its growing flock of New York City transplants.

The two churches are connected by 12 stained-glass windows from Germany depicting New Testament scenes, which have graced St. Thomas for a century and will soon surround the altar at Blessed Kateri. The church is named after a 17th-century Mohawk who converted to Catholicism against her tribe’s wishes.

“We’re building a very large church,” Msgr. Desmond O’Connor, pastor at Blessed Kateri, said in an interview. “And we thought it could sustain windows as big and imposing as the ones down in Harlem.” 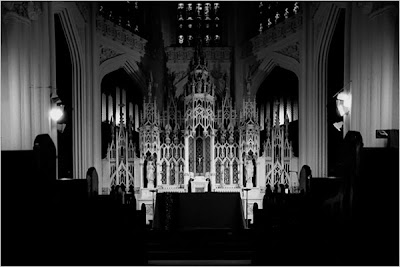 The transfer of the windows was arranged through a new program in the Roman Catholic Archdiocese of New York through which priests can select sacred objects — crucifixes, chalices and pulpits, for example — from shuttered churches and give them new homes. The archdiocese began these artifact adoptions last year when it closed 21 parishes, most of them in Manhattan, the Bronx and in old industrial suburbs amid the shrinking of the Catholic populations there.

Church law prohibits the sale of such religious items and calls for their disposal only if they are damaged beyond repair, so the recent wave of closings presented a problem: What to do with all the stuff — some of it beautiful, much of it quite worn — behind the churches’ padlocked doors.

There are similar programs in other parts of the country, most with elaborate safeguards, including password-protected Web sites open only to priests, and storage areas equipped with surveillance cameras and alarms.

“The last thing you want is to find one of those pieces in some antique shop or on eBay,” said Msgr. Louis A. D’Addezio of the Archdiocese of Philadelphia, whose artifact-swap program was set up in 1991, one of the first in the nation.

Often, the items move from a shuttered church to an active one without much notice or protest. But there are times when those transfers end up entangled in legal disputes, as was the case with the windows from St. Thomas.

In 2004, former St. Thomas parishioners sued the Archdiocese of New York to keep it from razing their church, arguing that they should have a say on what happens to the property. Politicians asked preservation officials to grant the church landmark status, and a descendant of the German windows’ maker wrote a letter to the archdiocese, calling the proposed demolition of St. Thomas a “barbaric act.”

“We were trying to prevent what’s been a house of worship and architectural icon for more than a century from being picked apart and destroyed,” said Eric V. Tait Jr., 68, a former altar boy at St. Thomas who has helped lead the fight to save the church, which is on West 118th Street near St. Nicholas Avenue. The church is still standing, but its future is doubtful.