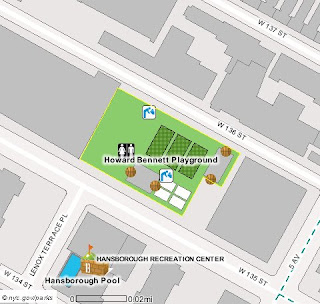 Although not a “park”, the Howard Bennett Playground, located in Harlem on 135th street between 5th Avenue and Malcolm X Boulevard is part of the New York City Parks Department www.nyc.gov/parks and is named for
Howard Bennett (1911 -1981), the man responsible for
getting January 15th designated as a national holiday in
honor of Dr. Martin Luther King’s Birthday.

Following King’s assassination in 1968, Howard Bennett was inspired to pursue a national holiday commemorating Dr. King’s life and memory, an effort he would devoted the last 13 years of his life to. A community activist and former labor leader, Bennett established a “Dr. Martin Luther King Jr. Holiday” storefront office in Harlem and lobbied local residents and area politicos at the popular eatery “22 West” 135th Street, located in the Lenox Terrace complex across the street from the playground. 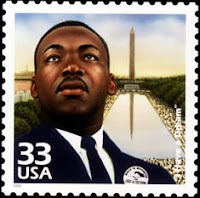 The flier below supported the national holiday, and it lists Bayard Rustin as Executive Director: A. Philip Randolph Institute; and Howard Bennett, National Coordinator; of the “National Citizens Committee for a Dr. Martin Luther King Holiday” with the committee’s address given as 339 Lenox Avenue. 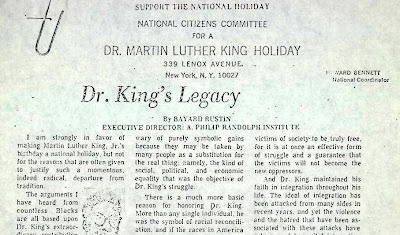 Below is the text from the plaque at the 135th street entrance to the playground.

HOWARD BENNETT PLAYGROUND
1.2 acres
Howard Bennett (1911-1981), a Harlem community leader, was the founder of the National Citizens Committee for a Dr. Martin Luther King Jr. Holiday. From the time of Dr. King’s assassination on
April 4, 1968 until his own death thirteen years later, Bennett campaigned persistently to make January 15, the birthday of the civil rights leader, a national holiday.

The idea for the holiday was conceived while Bennett and several friends were returning from Dr. King’s funeral in Atlanta. After renting a storefront in Harlem which he called “Dr. Martin Luther King Jr. Holiday,” Bennett enlisted the help of a few dedicated grassroots activists and began gathering signatures.

In April 1970, along with William Byrd and other members of the 131st Street Block Association, Bennett presented six million signatures to Brooklyn Congresswoman Shirley Chisholm and Detroit Congressman John Conyers. Chisholm and Conyers introduced a bill into Congress, which was passed in 1983. On November 2, 1983, President Ronald Reagan signed Public Law HR3706 making January 15th a National Holiday in honor of Rev. Martin Luther King Jr. Since 1986, the holiday has been observed on the third Monday in January.

Bennett, one of sixteen brothers and sisters, was born in Greenwich Village. After serving in the Pacific Theater during World War II, he became a leader of the 369th Veterans Association, a Harlem-based organization of war veterans. He served as Labor Chairman of the New York Branch of the N.A.A.C.P. and was a consultant and confidante of labor leader A. Phillip Randolph. In 1977, Southeastern University of Greenville, South Carolina, awarded him an Honorary Degree of Doctor of Humanities for his contribution to civil rights. His last public act was to participate in the Solidarity March on Washington for Jobs on September 19, 1981.