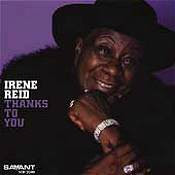 “I just love to sing,
it’s a gift God gave me”
Irene Reid

Beginning her singing career in church choirs, Reid tried her luck, in her late teens, at Harlem’s famed Apollo Theatre. This was in 1948 and she won the amateur talent contest there four weeks in a row. This resulted in a job with Dick Vance’s band, then resident at the Savoy Ballroom. She stayed with the band for two years, then struck out as a single. For a brief period, starting in 1961 she joined Count Basie, touring Europe and appearing on some of the band’s live concert albums. After Basie she continued her solo career, often working with an organ-guitar-drums trio billed as Irene Reid & Company. In the late 80s, Reid was still singing every opportunity she had and visited Europe again, where, among a number of high-profile engagements, she appeared at Ronnie Scott’s club in London. It was in London, in 1989, that she recorded her first album under her own name, with organist Mike Carr, Dick Morrissey, Jim Mullen, and drummer Mark Taylor.

She also continued to perform at a variety of Harlem venues, including Small’s Paradise, Lenox Lounge, West End Cafe, Showman’s and in outdoor concerts with Jazzmobile. Her singing style was powerful, echoing the ethos of the gospel tradition that marked her formative years. There’s a bittersweet element to her sound that particularly suits ballad interpretations, but when the mood was upon her she could belt the blues with enormous authority.

Irene Reid with Mike Carr: What a Wonderful World