It’s with a great deal of emotion that Harlem One Stop informs fellow Harlemites and neighborhood visitors that one of the community’s favorite restaurants, Copeland’s will be closing on Sunday, July 29th. 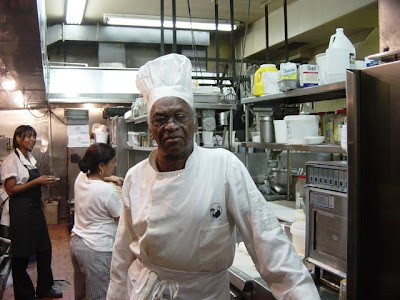 The homestyle quality of it’s food and the gracious manner of it’s staff made it a frequent neighborhood stop. The restaurant’s cafeteria side, “Reliables“… was just that, an ever reliable place for grabbing a great breakfast, lunch or dinner and for running into friends, neighbors and the likes of Peter Jennings, Starr Jones-Reynolds or Savion Glover.

Quite honestly, I can’t think of a more comfortable or beloved place!… Mr Copeland, we will truly miss you, but we also want to take this opportuniity to thank you for all those delicious meals over many wonderful years. I know we speak for the village of Harlem in wishing you and your family all the best. Also, fond memories and kind regards go out to the staff, past and present, particularly Clyde, Evelyn, Wendy, Gertie, Jose and dearest Chris!

On a more personal note, our warmest thanks too, for your years of serving as the “home kitchen” to Harlem One Stop’s “staff!”

PS: We would appreciate and post your brief memories or comments on Copeland’s.

Calvin Copeland was there when rioters burned and looted stores in 1964, when crack cocaine and AIDS tore families apart, when brownstones were for sale for $50,000 and few outsiders dared move in. He endured fire and financial ruin, yet each time he picked up the pieces and prospered, as bold and resilient as the neighborhood around him. If he could be the master of his fate, he would live out his days in Harlem, Mr. Copeland, 82, said yesterday, serving soul food from the restaurant he has owned for almost five decades, Copeland’s, a relic of the past anchored in a place fast in transition. Gentrification has pushed away many of the black families who used to patronize his business. “The white people who took their place don’t like or don’t care for the food I cook,” he said. “The transformation snuck up on me like a tornado.” After falling behind on rent and bills a year ago, Mr. Copeland tried to hold on to his business, investing more than $250,000 of his savings, he said. Finally, in May, he acquiesced to defeat. Copeland’s, at 547 West 145th Street, between Broadway and Amsterdam Avenue, where Harlem is known as Hamilton Heights, will hold its last gospel brunch at 1 p.m. on Sunday and then close its doors for good.

“I just can’t do it anymore,” Mr. Copeland said. With its smoke-mirrored walls, L-shaped marble bar and carpet the color of honey, Copeland’s is at once cozy and démodé, a place where men in polyester suits and women in hats dine alongside European tourists who come to Harlem to experience American black culture. Yesterday, Fred Staton, 92, a saxophonist with the Harlem Blues and Jazz Band, which plays on Sundays at the restaurant, stopped by to wish Mr. Copeland well. A tour group from the Netherlands had brunch there. Others, however, walked out after learning that the restaurant was not offering its usual Sunday gospel choir. (Mr. Copeland said he was too busy preparing for the final brunch to schedule entertainment.) “The food here is delicious, and it’s so sad to hear they’ll be gone,” said Martha Marsh, who has lived in Harlem for 40 years and said she regularly eats at Copeland’s. “She’s picky,” added her husband, John Henry. “If she says she enjoys it, it’s because the food is really good.”

Mr. Copeland started the business in 1958 as a catering service, one of Harlem’s first, in a modest storefront on Broadway north of 148th Street. He had but one worker, Gertrude Clark, who still works for him. Mr. Copeland, who is black, baked and decorated cakes; Ms. Clark, who is white and grew up on a farm in upstate New York, did whatever else was needed, which often included preparing Southern fare. “I had never eaten collard greens in my life, and there I was making fried chicken and souse meat,” said Ms. Clark, 73. She is now Copeland’s banquet manager. Mr. Copeland eventually rented the store next door, opened up a hole in the wall, expanded the kitchen and started serving breakfast and lunch, cafeteria style. It was similar to the one in operation today next to the restaurant on 145th Street, which opened for business in 1980. In 1981, the restaurant burned to the ground and the insurance company went bankrupt before it reimbursed Mr. Copeland for the losses. “I lost everything, except for the liquor,” he said with a chuckle. “We had it in a separate room with concrete walls, and I guess the fire couldn’t get through.”

At the time, banks were not prone to lending money to restaurant owners, especially if the restaurant was in a place as volatile as Harlem, which had had two riots prior to the one in 1964, incited by the fatal shooting of a black teenage boy by a white police officer. But Mr. Copeland had many friends, and one of them helped get him approved for a small loan. The rest of the money came from Ms. Clark, who mortgaged an upstate property to help her boss. “If that thing didn’t go, she would have lost her property, she would have lost her job, she would have lost everything of value she had,” Mr. Copeland said. “She had a lot of faith in me, and I delivered.” Copeland’s became a destination for black families from as far as Philadelphia. Black entertainers and other notables would stop by when in town. Desmond Tutu, the retired Anglican archbishop, ate there once, and so did Muhammad Ali and the comedian Richard Pryor, who threw money in the air when he left the restaurant so as to distract the crowd that had surrounded him, Mr. Copeland said. Natalie Cole is a regular. Michael Jackson came by once, but did not come in; one of the waiters took a plate of food to his vehicle, which was parked outside. “I never paid attention to this stuff,” Mr. Copeland said. “I was too busy cooking.”

Born in Smithfield, Va., Mr. Copeland started working at age 13, washing dishes at a Greek restaurant in Newport News, Va., where his family lived at the time. He moved on to shuck oysters and prepare shellfish cocktails, but in his spare time, he watched the chefs at work. Soon, he was helping make breakfast: sausage, home fries, eggs and grits.

Mr. Copeland moved to New York in 1945, and was married within five years. His wife, Rita Copeland, an Irish immigrant, was a waitress and he was a cook at a restaurant in Paramus, N.J. They kept the relationship a secret at first; at a time of racial segregation, they were convinced that they would lose their jobs if the boss found out they were together. Mrs. Copeland, 88, has Alzheimer’s disease, and Mr. Copeland devotes his afternoons to her, feeding her and brushing her hair while he tells her the day’s news, even though she cannot respond. He hired two nurse’s aides to watch over her night and day at their home in Hamilton Heights. Mr. Copeland said he would be able to devote more time to his wife once the restaurant is closed, but he is not thinking about retirement.

“I don’t believe in that,” he said. “I’ve got a plan in my head, but I don’t want to reveal it yet. All I can tell you is that I’ve got to have something going. I have to or I may as well not be here anymore. To me, idleness is worse than death.”