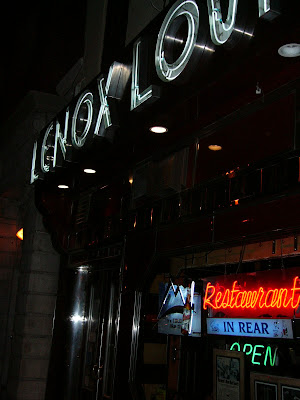 There are few establishments in Harlem that rival the distinctive facade and graphic signage of the Lenox Lounge located at 288 Lenox Avenue just south of 125th Street. Constructed in 1939, its exterior and interior design are hallmark examples of the Moderne style, owing much to the streamlining theories of designer Raymond Loewy and the design currents of 1939, which ranged from the architecture of the New York Worlds Fair to Cedric Gibbons’ sets for the “Emerald City” in the film the Wizard of Oz.

The lounge’s white neon letters with their chrome surrounds are set against “Maroon” wall panels, a fashionable color for Cadillacs, Studebakers, and other trend setting items of the period. The panel’s sturdy construction and glossy baked enamel finish are borrowed from the era’s automobile and diner construction technologies. The interior light columns framing the lounge’s bar and banquettes are composed of frosted glass fins which conduct light (similar to fiber optics) from a hidden light source, through the glass, brightly revealing itself along the profiled edges. 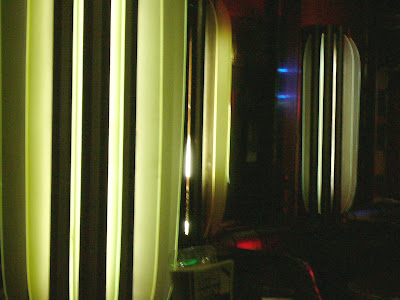 The venue’s music and dinning area, dubbed the Zebra Room was a favored spot of Billie Holiday and offered a certain brazen chic when it “appropriated” a distinctive zebra pattern wall paper reminiscent of that in the famed mid-town club, El Morocco. The signature pattern was such a recognizable backdrop from countless newspaper photos of socialites and celebrities that El Morocco sued in an effort to prevent its use. 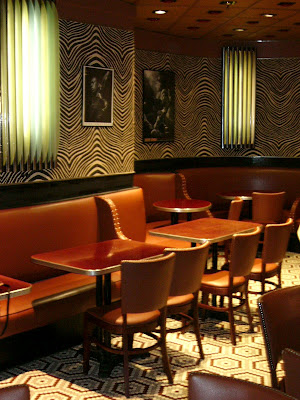 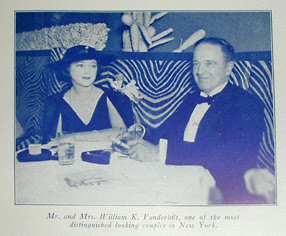