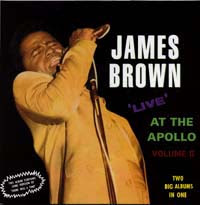 I taught them everything they know,
but not everything
I know. – James Brown

Perhaps no 20th Century performer better tapped the aspirations and pride of post-war Harlem then the singer James Brown. As Harlemites mourn his passing there’s the sadder realization that a little bit of Harlem passes with him. For the Apollo audiences of that generation and those that followed, Brown was that galvanizing performer… either they wanted to be him, or they were trying to re-define him…. whether from the Motown stable (Temptations or Supremes), the “British Invasion” (Rolling Stones), crossover pop (Michael Jackson) or comedy (Eddie Murphy), James Brown was forever, the reference and base-line.

As the undisputed, “Godfather of Soul,” Brown built a following that far outstripped film land’s Corleones in inspiration, loyalty and influence. To Don Corleone’s, “it’s not personal, it’s business.”…. Brown’s response might have been, ” if it ain’t personal, it ain’t soul… and that is my business!” To recall his “personally” sweat producing beat and vocals on, “gonna’ have a funky good time…” was to possess his calling card. It was in knowing that James, was always going to be “Black” and uniquely James, that places him in the pantheon of African Americans that include the likes of Malcolm X and Muhammad Ali.

Today, as the “personal” in Harlem juggles soaring real estate values with shifting cultural ones, Brown’s, “Say it Loud, I’m BLACK and I’m PROUD” appears to be slipping more towards his later, “Livin’ in America,” penned for some numbered Rocky sequel. My hope is that his spirit, like one of his capes will envelop us, and that Harlem, like Brown from the Apollo stage, will rise up too… Leadin’ America in a renewed urbanism that values a little bit of funk and a whole lot of soul! – The Harlem Eye / Harlem One Stop 12.26.06